Seattle, Washington. Home of Grey’s Anatomy, Twilight, a whole lot of Native American history and some pretty darn good music. I was super grateful to be hosted by some family friends here, which made the experience so much more fun (and comfortable!)

After an uneventful train ride down to Seattle (with a brief stop for the customs officers to come onboard and check the train) we pulled into King Street Station about mid-morning. My original plan had been to drop my bags off in the luggage storage area and go and find something to eat but this quickly changed after seeing their prices! I decided to just settle down into the station seating and read my book to pass the time. This was going well until I noticed a man following me around the station, eventually moving into the seat next to me. Sufficiently unnerved, I called my dad for some moral support and set out into Seattle to find my bus. This didn’t take long and soon I was on my way out to the leafy neighbourhood of Madrona. Thankfully I was able to find some lunch here and afterwards wandered down to a little park where I sat and read my book in the sunshine for the next few hours.

Before long I was met by the family friend I would be staying with, and we drove out of Seattle to their beautiful house in the woods, through the crazily huge Microsoft complex. I was introduced to their gorgeous cats (by this point I really missed having animals to cuddle) and settled into my room which felt like the absolute height of luxury after 2 weeks in hostels. That evening we planned how to spend the weekend; they both enjoy hiking so we tried to find a good hike nearby that wasn’t covered in 6 feet of snow, surprisingly hard in May!
Saturday 12th May

After a good breakfast we set off about mid-morning for the drive out to Mount Rainier National Park!!! I was SO excited about this as I have always wanted to visit the American National Parks and this would be my first! When we arrived I got out of the car like an over excited tourist (which I was) to take a picture of the entrance sign. The scenery driving through the park was honestly from a dream, with skyscraper pine trees and snowy peaks, and tiny cabins nestled among the trees. It was also really exciting to see signs for the trails I’d seen of on Instagram such as the Wonderland Trail. 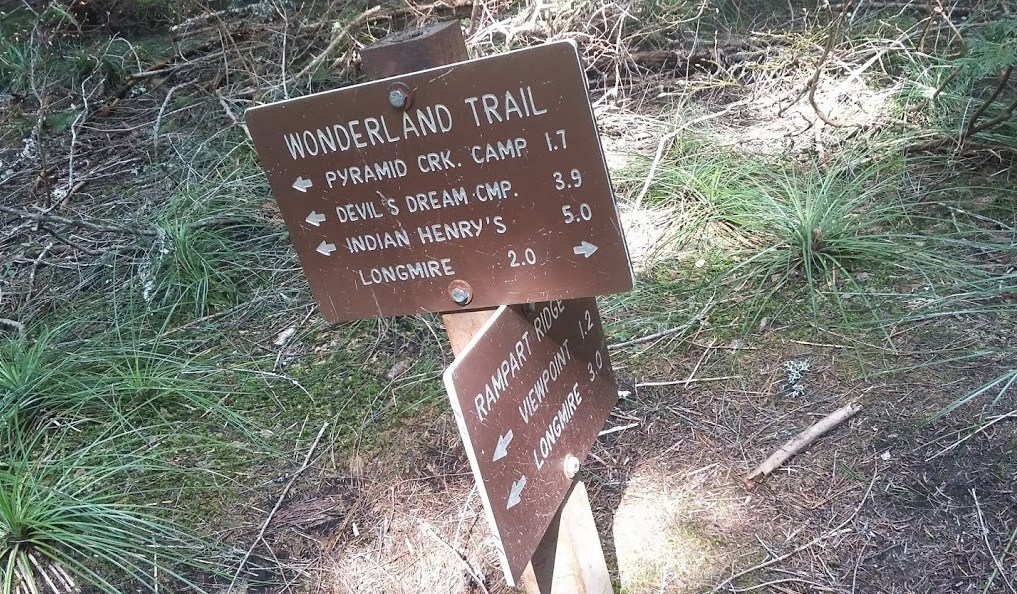 After parking at Longmire we set off along the Trail of The Shadows until we reached the base of the Rampart Ridge Trail. This began a long series of steep switchbacks to gain some elevation (and nice views). Although I’d started off the day layered up it wasn’t long until I was stripping them off as both the day and I warmed up. The nature was beautiful along this trail with incredibly old trees, trickling waterfalls and some friendly wildlife (more chipmunks!!) to see. After a while the trail opened up into a viewpoint over Longmire so we could see how high we had come, and across the snow sprinkled peaks opposite. As we started to head back down the cirular route we came across a viewing spot for the summit of Mount Rainier which was unfortunately covered in thick clouds; however some waiting paid off and eventually he peeked out to say hello! We encountered some snow on our decent which was lots of fun, although luckily not too deep as I was hiking in sandals. When we made it back to Longmire Mt Rainier was out in all his glory with the sun glistening off the snow. After visiting the store so I could buy a postcard we headed into the pretty Longmire Inn for some dinner, amazingly they had a vegan option! 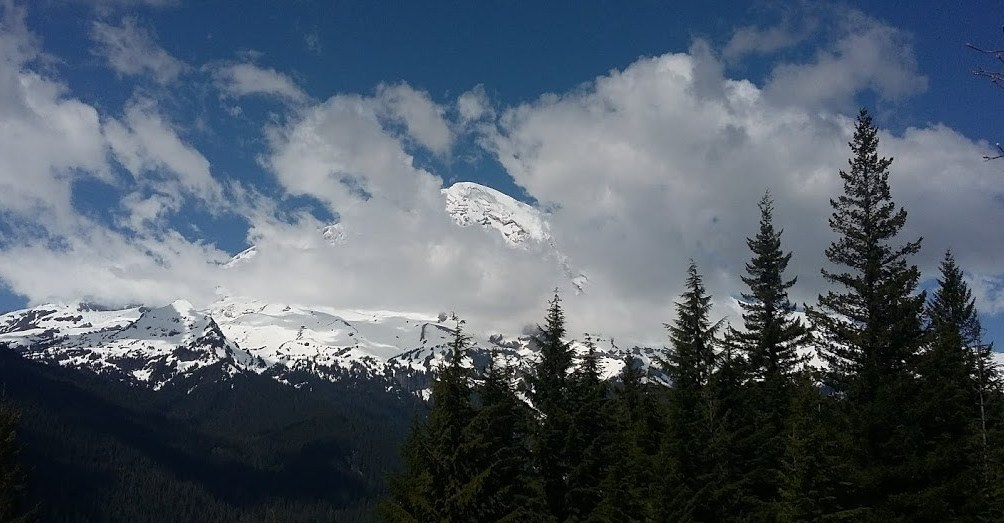 As we left the park the sun was beginning to sink lower in the sky, illuminating Mt Rainier in glowing gold. On the drive home we pulled into a viewing area where there was a perfect view of Rainier, probably one of my favourite moments from my whole West Coast trip.
Sunday 13th May 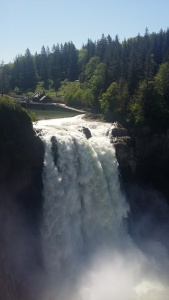 We started off the day with a visit to another PNW icon, Snoqualmie Falls. They were just as breathtaking as I had expected, with the spray casting rainbows across the forest views.

After this we endured the crazy traffic to drive into Downtown Seattle. We managed to find a parking place and headed to the Benaroya Hall for a talk by a National Geographic photographer, mainly focusing on his work in North Korea. This was so interesting and inspiring and I felt very lucky to attend it. We then walked down to the famous Seattle waterfront to see the big wheel and the ferry (not fairy) boats crossing the Puget Sound. As we walked back up to the city we also passed through the infamous Gum Wall, which is exactly what it sounds like: a wall covered in peoples used chewing gum. Kinda cool, kinda gross. I was then able to fulfil my Seattle wish of buying some Grey’s Anatomy merch in a crazily overpriced tourist shop but was so worth it.

As the evening drew in we headed to Wild Ginger for dinner. This was honestly one of the biggest restaurants I’d ever been in, with about 4 huge rooms of seating. We were seated in a little room at the back with just one other table which was lovely and peaceful! The food was all Asian inspired and I had a vegetable rice dish with some garlic bok choy which was delicious.
Monday 14th May

Somehow, despite almost a month in the States I was yet to go on a big shopping trip! I decided this needed to change and did my research to find the biggest mall near to Seattle to go and spend my leftover money. I got the train then bus out to the Westfield Southcentre mall and spent the whole day browsing shops (and enjoying the aircon as it was super hot outside!) I ended up buying myself a second bag as the bag I had initially bought out to America with me was now bursting at the seams with new purchases.
Tuesday 15th May 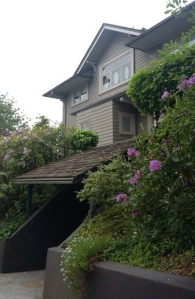 My last full day in the United States and it was time to go full tourist mode on Seattle. After a very early start I was on the bus up to the Queen Anne neighbourhood, home to the real life interns house from Grey’s Anatomy! This area is super gorgeous and I wandered the streets for a while taking in each, progressively larger, house that I walked by. It was cool to see the interns house but also a bit weird as it’s actually a house where people live so you feel a bit nosy taking pictures outside…

I then walked to the edge of this neighbourhood to Kerry Park to take in the views of the Seattle skyline. I meandered down the hill until I found a bus that would take me to the Space Needle where I could warm up a bit (it was a chilly morning) and get some charge on my phone. At this time of day the centre was filled with some pretty interesting types so I didn’t stay for too long. After getting enough phone charge to plan my day I hopped onto the monorail that took you downtown and walked to the Pike Market. After spending an hour or so browsing the stalls I decided to see some more of Washington, and bought my ticket for the ferry across the Bainbridge Island!

The ferry ride was short and smooth, although very windy! You get some incredible views across the Puget Sound from the boats, right across the Olympic Mountain Ranges! I wish I’d had longer to spend on Bainbridge Island as from what I saw of it it was gorgeous. I only had enough time to grab some lunch from Emmys Vege House and browse the high street before hopping back on the boat.

On the way back out of Seattle we stopped briefly in Redmond where I wandered around until I found a 7 11 selling slushies!! Finding and drinking this in the scorching sunshine was honestly one of my happiest moments in America. When we got back I spent the evening packing up my stuff and cuddling the cats.
Wednesday 16th May

After some more last minute packing I was ready to go! I got a taxi out to SeaTac airport and checked in for my flight home!